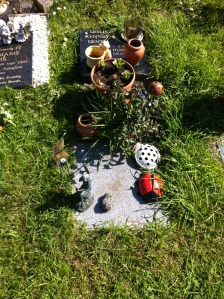 I’ve been spending a lot of time thinking about death and loss recently, not only from a personal perspective, but also academically. I’ve been writing an academic study of the things people place on cremation plots – how they remember their loved ones. My study was quantitative (yes, I really did count bunches of flowers and cat ornaments) but behind each item there is a story, a memory, a reason. Every item is placed because it had significance in a relationship of importance – and just because the relationship is over, it doesn’t mean the feelings stop. Every time I counted another cherub (and some of them were really not to my taste), I remembered that they are a symbol of love to the person who put them there.

I’ve finally finished writing the study, and realised it’s left me feeling quite gloomy, so I need to think hard about what I study next. I have a year in which to produce 18,000 words to MA standard, and I have a pretty free hand about the subject. I think I’ve done enough death and loss in 2013, so don’t really want to extend this study. I don’t mind the graveyards, it’s the books about death which are getting me down!

I quite fancy the idea of testing my academic theological reflection method with some “willing” volunteers, but suspect that will run to a lot more than 18,000 words, so could save it for my doctoral thesis in a year’s time. So in the meantime I could do some heavy philosophy to back up or break my methodology, but my head may explode. I think it’s likely to be the theological and philosophical equivalent of partial differential equations, which I was rubbish at solving.

Or I could find myself a nice friendly parish based research question, which might be useful in practical rural ministry. Any ideas, anyone?

8 responses to “Which way now?”

This site uses Akismet to reduce spam. Learn how your comment data is processed.

Running and other happenings

Reflections on life as I live it

Base state: on the sofa with the cat

One person trying to work out what God wants him and, perhaps others, to do

cos where's the fun in arriving?

Exploring truth, reading a lot of books and generally mulling things over

A teacher, preacher and writer, living in the UK.

Encouraging & Building Up the Church

Sara's blog temporarily taken over for Tim and Sara's wedding

Come wander with me...

Ramblings on a journey through life, ministry and creation